Muktinath Yatra by Jeep is 6 days package including sightseeing in Kathmandu, Pokhara, and Jomsom. Muktinath tour by road is the very common package that most of the devotees choose to visit Muktinath Temple. You will be driven from Kathmandu to Pokhara for the first day, next day to Jomsom crossing Beni, Tatopani, Ghasa, and Marpha. And on the third day to Muktinath. After darshan back to Kathmandu following the same route.

Muktinath Temple is a sacred place both for Hindus and Buddhists located in Muktinath Valley at an altitude of 3,710 meters at the foot of the Thorong La pass, Mustang district, Nepal. The Hindus call the sacred place Mukti Kshetra, which literally means the "place of salvation". Mainly the temple is a predominant Sri Vaishnava origin and worshipped by Buddhists. This temple is considered to be the 105th among the available 108 Divya Desam. The ancient name of this place, before Buddhist origin is known as Thiru Saligramam. These houses the Saligrama Sila considered to be the naturally available form of Sriman Narayana (The Hindu Goddess head). It is also one of the 51 Sakthi Peetams.

The central shrine of Sri Muktinath, predominant among all 108 Hindu SriVaishnava Divyadesam is considered one of the eight most sacred shrines for Hindu Vaishnavas known as Svayam Vyakta Ksetras, the other seven being Srirangam, Srimushnam, Tirupati, Naimisharanya, Totadri, Pushkar, and Badrinath. The temple is very small. Muktinath is one of the most ancient Hindu temples of God Vishnu. The murti is of gold and is tall enough to compare with a man. The Prakaram (outer courtyard) has 108 bull faces through which water is poured. It is of freezing temperature. The sacred water that flows in 108 pipes around the temple complex denote all sacred Pushkarini waters (Temple Tanks) from all 108 Sri Vaishnava Divya Desams including Srirangam, Tirumala, Vaikunta, where the devotees take their sacred bath even in the freezing temperatures.

In Hindu astrology, there are 12 zodiac or Rashi and 9 planets or Graha, giving a total of 108 combinations. Also, there are 27 Lunar mansions or Nakshatras which are divided into 4 quarters or Padas each giving a combination of 108 Padas in total. The worship is conducted by Buddhist nuns. The waterway downstream from Muktinath along Kali Gandaki is the source of all Silas or Shaligrams that are required to establish a temple of Vishnu anywhere in the world. It is considered to be one of the holiest places of pilgrimage of Hindus, Buddhists, and Vaishnavas.

Day 04: Jomsom to Muktinath to Pokhara.

Day 05: Pokhara half day Sightseeing & back to Kathmandu.

Option I: The easiest way to visit Muktinath Temple is by Helicopter. Yes, within 5 hours you can visit Muktinath from Kathmandu. There are five and six seated Helicopters available for charter. Muktinath Helicopter Tour might be a better option to consider.

Option II: Instead of driving from Pokhara to Jomsom, you can also fly there and save a day. There is 16 seated Twin Otter small Plane that departs every day from Pokhara and takes just 15 minutes to reach Jomsom. And on the same day, you become able to visit the Muktinath Temple and fly back to Pokhara next day. Muktinath Tour might be another appropriate choice to consider. 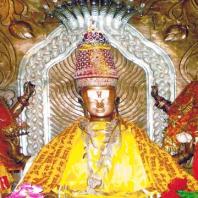 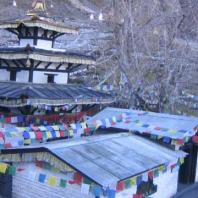 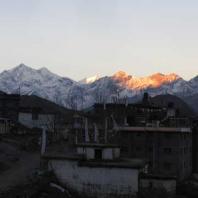 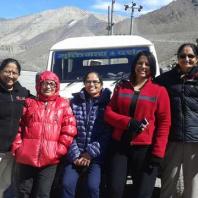 What our customer says? 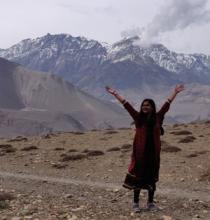 Most Memorable Trip to Nepal

I am a solo Pilgrimage Traveller and for the first time traveled through travel agency along with my Father.

Fortunately, my entire Muktinath Yatra was like a surprise package since I had no clue about the routes that I would come across while traveling to Muktinath Temple.

Nipendra who was the Operations Lead at Lumle Travel Agency accompanied us throughout the duration and educated us about each and every detail of the locations and the history behind it. We had a very skilled and professional driver too (Vijay) who made the journey easy and fun.

There were no issues with accommodation and food. Also, we could stop the vehicle in between for site seeing and taking pictures without any restrictions.

Overall my Dad and I were completely satisfied and happy :) 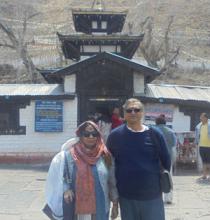 Visit to Muktinath Temple by Jeep

We approached Lumle for organising overland trip to Muktinath from Kathmandu and back. Operations Manager Nipendra Maharjan was the one who helped us plan our trip.

He accompanied us all through the trip. We engaged a Mahindra Scorpio for our trip. Excellent and caring service has been Nipendra's hallmark. Along with the driver Sarath, both were outstanding. Ineffable to mention about their excellent conduct and service.

I would strongly recommend Lumle if you are planning trip to Muktinath by overland tour. Nipendra is a great ambassador for Lumle.

Would recommend hiring an alternate vehicle other than Scorpio if you are looking at having more leg room and comfort. 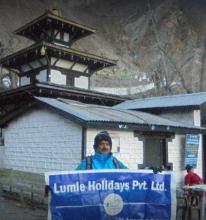 Muktinath Tour Itinenary was prepared in nice manner considering the road conditions, traffic, and other factors. Tour guide Nipendra assisted throughout the trip with more caring.

Hotel and food arrangements were done nicely. Guided to collect the Saligrama stones from kalakandaki river that is excellent time to have in the tour.

Nipendra assisted in the shopping also to buy some souvenirs and trekking items. When the return flight had issue due to Kathmandu runway issue stayed with me to make sure managed to get the flight and depart safely.

Great tour operators and extraordinary guidance from Nipendra. Recommed to use Lumle Holidays for Nepal tours for their caring service 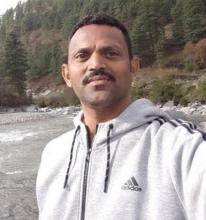 I planned to visit Mukthinath temple and approach Lumle Holidays Pvt. They perfectly planned my itinerary and arranged everything without any tension. They with me from starting to end of my itinerary. Very excellent customer service. 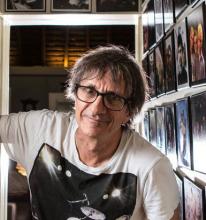 Jeep to Mukthinath from Kathmandu

We hired the jeep from Kathmandu to Muthinath for 10 days 9 nights , we changed our itinerary several times but it was never a problem , our driver ameel was always very helpful and good company , would give the company 10/10 , very reliable and overall brilliant , could not have been better tony Mott